Photographs of Speedway, Grasstrack and Longtrack Bikes in my collection.

JAWA Engine in a JAWA Frame.

This bike was owned and ridden by Peter Collins MBE (PC) during 1973, 1974 and 1975 Seasons. Ridden to many successes including, Team success with Belle Vue Aces, England and Great Britain Lions Touring Teams and not forgetting the famous Match Races / Run-offs against Anders Michaneck. When Peter became a Works Weslake Rider for the 1976 Season, he passed this bike onto his younger brother Philip (Phil) Collins who rode it during the 1976, 1977 and 1978 Seasons, before selling it to a man living in Fleetwood. The bike was then used for Sand Racing before being laid up for many years. I purchased the bike in 2011 and decided it was worth restoring. The restoration took approximately 6 months. I have included a couple of photographs of the bike as found. Well pleased with the result.

This bike has been built to replicate Peter's 1984 World Best Pairs Winning Bike. Along with his Belle Vue Aces team-mate Chris Morton MBE, they won the title at Lonigo, Italy. The Engine was purchased from Peter, who also helped me with the build ensuring authenticity, resulting in him signing the rear mudguard. The Weslake Engine produced by the Weslake Factory was first tested in 1975 with a re-mit to win World Titles. Peter Collins MBE became a Weslake Works Rider in 1976 and subsequently became the 1976 Individual World Speedway Champion.

This bike was originally owned by the late Simon Wigg (WIGGY) and was used during the 1988 and 1989 Seasons. It was his first GM engined bike following his departure from Godden machines. The engine was supplied by Trevor Hedge (ex Rider and GM Importer) as a kit for Eddie Bull (Engine Tuner) to build for Simon. The Frame was constructed by Paul Duncombe of Dula Engineering, where Simon worked in his early days of riding. The bike was assembled by his older brother Julian Wigg. Ridden to many successes including, Team success with Oxford and England and not forgetting individual success becoming the 1988 and 1989 British Champion, as well as finishing 6th in the 1988 Individual World Speedway Final in Vojens, Denmark , and 2nd in the 1989 Final in Munich, Germany. The bike was then sold, as Wiggy renewed his stable of bikes on a regular basis, with it being aquired by Jeffery Brailsford for his son Kenny to ride. He rode the bike in 2 meetings, decided it was not for him and put it into storage, where it stayed until 2011 when it was advertised on eBay as a Buy It Now. I couldn't believe a WIGGY bike being available and decided to buy. I have not been disappointed.

These photographs were taken at a Photo-shoot hosted by ProBike Art, near Buxton. Had a great afternoon with Ian Daisley taking all the photos of the bikes.

Top speed of approximately 110mph (with NO BRAKES).

The frame is a Hagon, very similar to the JAWA frame of the time, but this frame was built to Peter's requirements.

The bike is fitted with a 2 Speed Gearbox to give it that extra drive from the Start Line and the faster top speed for the challening tracks of Europe. Longtrack or Sandbahn Tracks are usually in the range of 800 to 1,200 metres long.

Note: This bike is one of the few that will not be restored, it will be kept in the condition as it was last raced by Peter Collins MBE.

The ESO was the fore-runner of the JAWA.

The ESO Factory, owned by Jaroslav Simandl, was a small engineering firm in post World War II, Czechoslovakia, making parts for racing JAP engines, which were in short supply. By 1949 the company was making complete replica JAP Speedway Bike. In 1953 the company made it's first ESO designed engine and Speedway Bike. In 1966 the Czech Government anounced that the ESO Speedway Bike would henceforth be known and marketed as JAWA.

In the mid 1960's Barry Briggs MBE (BRIGGO) introduced the ESO to the World of Speedway by winning a World Final using one. Soon everyone wanted an ESO and later a JAWA. Barry Briggs MBE became a Works Rider for JAWA and was the Sole Agent for ESO / JAWA in the UK.

This bike was restored by me during 2014 and they are quite rare these days. I will be commencing a 1966 ESO 2 Valve DT-6 restoration soon that you will be able to follow on my Ongoing Projects Page in due course.

During the 1976 Speedway Season, Steve Hartley signed for Ellesmere Port Gunners. He rode many meetings starting at Reserve but soon partnering John Jackson, the Gunners No.1, wearing the No. 2 Race Jacket. Steve was initially a Sand Racer riding JAP's and a BSA Goldstar with great success. He progressed to Grasstrack and subsequently the Continental Longtrack Scene where he had many successes including winning the Zwiebrucken Silver Rose in 1975. He was a Racer that thrilled the crowds, 2nd was never good enough, but this led to some big offs.

Through the Winter of 1976 / 77 Steve was recovering from a broken leg (broken in 5 places requiring major surgery) after a massive off at a Grasstrack at Hereford, near the end of the season. During this time he built a bike for the coming Speedway Season, to consolidate his position in the Ellesmere Team. He was also preparing his Grasstrack Bikes and Longtrack Bikes for a busy season in all 3 disciplines. His first practice of the year was on the Sand at Ainsdale where he had a fall and re-broke his leg, this was to end his racing career.

This JAWA Framed Weslake is a rebuild of that bike that Steve never rode. It has a JAWA 2 Valve Frame and Forks, a Weslake engine fuelled by an AMAL MkII Carburettor. The Silencer is the BSPA 1976 approved Silencer which was the first of the Silencers to be used.

1/6th Scale Weslake Engine - Cast in Pewter on Marble Base

This is a scale model (1/6th Scale) of a Weslake Speedway Engine. It is cast in Pewter an presented on a Marble Plinth. The detail is fantastic. It has been produced by Tom Newey of Club Coins UK Limited. It is one of a Limited Edition run.

Check out Tom's website for how you can get yours www.clubcoinsuk.com 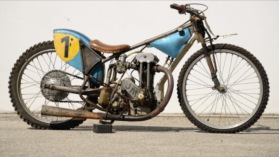 This is a Josef Hofmeister built Longtrack Bike dating from 1957 and fitted with a rather special JAP 84S Engine from the early 1970s. Still doing research on this machine.

The bike was designed and built by Joseph Hofmeister and incorporated a revolutionary design at the time for the Rear Suspension. Many features were unique. He built it utilising a highly tuned British JAP Engine, which as you can see has external Valve Springs.

The bike is 500cc and drives through a 2 Speed Gearbox. It was used for racing on oval circuits on Grass, Sand and Shale around 1,000 metres in length. Only thing to remember, ‘Keep Turning Left’

I bought this bike at Auction in Milan, Italy (November 2016). It is a magical piece of Longtrack Racing History.

In the 1950s and early 1960s he was the first German International Star in Motorcycle Racing.

He built his own race bikes in 1957 on which he and many other riders had great success.

I recently aquired this 1957 FIS Speedway Bike. It was built in Poland and is a copy of the British Rotrax JAP.

The FIS was manufactured in Poland and is a copy of the British Rotrax Frame and JAP Engine. They were produced from 1954 until the early 1960s. This example dates from 1957.

The FIS name was in fact the initials of the machine’s creators, Tadeusz Fedki, Romuald Izewski and the name of the local track to their Workshop, Stalowcy.

The bike uses Methanol Fuel, has No Gears and No Brakes. It produces approximately 44 BHP and 6,000 RPM.

Even the Carburettor is a copy of the Amal Type 27 Track Carburettor.

This FIS is a great example of this very rare machine and I am very pleased to have this bike in my collection.

This Jawa Speedway Bike, was purchased some time ago to add to my collection. Restoration has been completed over the past 18 months.

It was used by Iconic Speedway Riders such as Ivan Mauger, Chris Pusey, Alan Wilkinson, Soren Sjosten and Peter Collins, to name a few. The bike was kept at the Hyde Road Stadium Workshop and was looked after and maintained by Belle Vue’s Swedish Ace Soren Sjosten.

Peter Collins MBE rode this bike and won on many occasions. Starting his Speedway Career with the Rochdale Hornets and subsequently the Belle Vue Aces in 1971. His bikes weren’t that reliable initially, so the Aces Track Spare almost became Peter’s own. (See photos above from  1971).

Here we have a 1971 Rotrax JAP that I recently aquired for my collection. It has been in a Museum for a number of years and not been treated very kindly. Hopefully it will clean-up well with a bit of Elbow Grease. I will add more photos as I clean it and hopefully get it looking like it did when Ove Fundin (5 times World Individual Speedway Champion) signed the Rear Mudguard. The bike has a history with Long Eaton 'Archers' (being their Track Spare).

This Speedway Bike was discovered by Peter Collins MBE in a very sorry state and was restored by him during Autumn 2004. The bike was then sold and the new owner placed the bike on loan with a Museum.

I will add more to the description in due course.

Starting to look better already after a couple of hours cleaning. Had quite a bit of surface rust and years of grime to remove.

A Jawa 897 just completed December 2019. Sourced for a friend and given a freshen-up. Be off to it's new owner in a few days time.