The Ongoing Projects Page shows Projects at varying stages of completion, to give a photographic history of a Restoration Project from as found through to completion, with a few comments along the way. 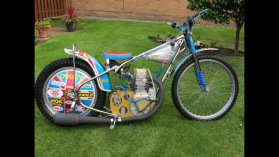 The photo to the left is Peter Collins's Last Speedway Bike which I was asked to refresh a couple of years ago for the current owner. Peter Collins MBE retired from Speedway at the end of the 1986 Season.

I have decided to create myself a Replica of this Speedway Bike.

Following the refresh of the original Peter Collins Bike I realised that I had sufficient parts in stock with the addition of a few bits to build myself a Replica. I tried buying the original but he was having none of it. I already had an 897 Engine that required restoration but before I started work on it, a brand new, un-used Jawa 897 Engine came available.

Assembly commenced in early September 2016 and has progressed between work on other bikes. Starting to look pretty good even if I say so myself.

Still a bit to do, Clutch, Chains, Cables, Exhaust, Silencer and Fuel Pipes etc. Also, got a Fork Cover being made by Gerald Smitherman of GTS Products. Hopefully in a few weeks it will be completed.

Forgot, still a few Stickers to add to finish the package.

Photos added of completed bike. Turned out great, very pleased with the result. 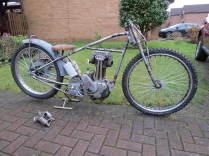 Future Project - Picked this un-finished project, quite an interesting build. The Frame was built by the late Dennis (Denny) Barber who passed away during 2019. It accommodates a Norton Engine which dates from 1947. Hopefully I will make a start on this in 2020. 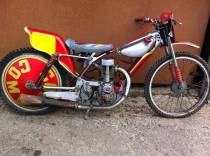 Dula Framed Weslake Grasstrack / Longtrack  -  This bike has recently been sold but the Customer wants the bike restoring with a few changes. I will add some photos to the Restoration Page as progress is made. 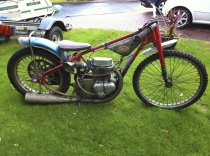 When I bought this Jawa 2 Valve I sensed it had a History. It had been knocked about and abused but something in the back of my mind told me this bike wants saving. It had been fitted with a Fibreglass Rear Guard and a Silencer, a short Seat and an odd Tank with a Brass Cap. However, what came with it was the Original Chrome Tank (Rusty), Original Steel Chromed Rear Mudguard (Rusty), Original Banana Seat (a bit worn). When these were put in the equation, the only Red framed Bike I could remember with Chrome Tank and Rear Mudguard was the Belle Vue Track Spare. I had re-fuelled and worked on this Bike at Belle Vue many times. Further examination of the bike when I got it home, after the deal was sealed, revealed more clues to it's Heritage. A trip to see Peter Collins MBE with the bike confirmed it was the Belle Vue Track Spare that he had ridden many times in his early years at Belle Vue. The bike was kept at Belle Vue in the Track Workshop and looked after / maintained by Soren Sjosten. It was ridden by many of the Belle Vue Riders from 1970 to 1973/4, including Peter Collins, Chris Pusey, Alan Wilkinson, Soren Sjosten, Ken Eyre to name a few. 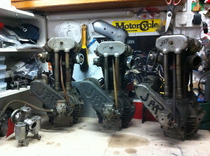